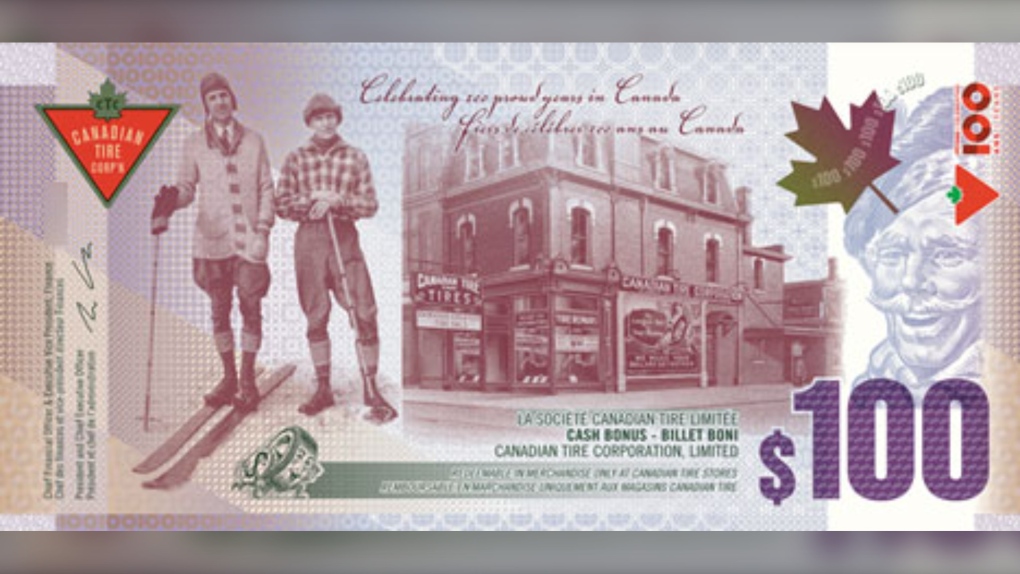 The authentic $100 Canadian Tire bills will be hidden at participating locations between Sept. 23 and 29, with clues to their locations being shared on social media. (Supplied/Canadian Tire)

To celebrate its 100 birthday, Canadian Tire is holding a scavenger hunt over the next week giving away $100 special edition bills in 19 cities across the country.

The company says during the campaign, which runs between Sept. 23 and 29, customers have the chance to collect something special.

"Canadian Tire is celebrating its 100th birthday by giving back to Canadians and to mark their birthday month, they’re hiding exclusive $100 Canadian Tire bills across Canada," officials said in a release.

The bills, which feature Sandy McTire and are valid for $100 worth of goods in stores, won't be easy to find because the search for them won't be limited to Canadian Tire locations.

Officials say during the search period, multiple bills will be hidden in the participating locations and they could be anywhere – on park benches, mail boxes or other places.

If it sounds like a daunting challenge, the company says it will be offering several clues on each day on Canadian Tire's TikTok channel.

Additionally, officials say "street teams" will also be in the participating locations to help out anyone searching for the bills.

"Canadian Tire is committed to its brand purpose of making life in Canada better," said Harriet Renshaw, the company's brand communications manager in a statement to CTV News.

"For it’s 100th birthday, the brand is giving back to Canadians in a fun and celebratory way by hiding exclusive $100 Canadian Tire money bills in many of the communities we’ve served for the past 100 years."

Ninety-five of them are available to be won and there is a limit of one per participant, regardless of how many are at the location when they are found. Full rules and regulations can be found here.

Here is where you can look for them:

The contest is not available to residents in Quebec, but the company says a similar campaign will take place.