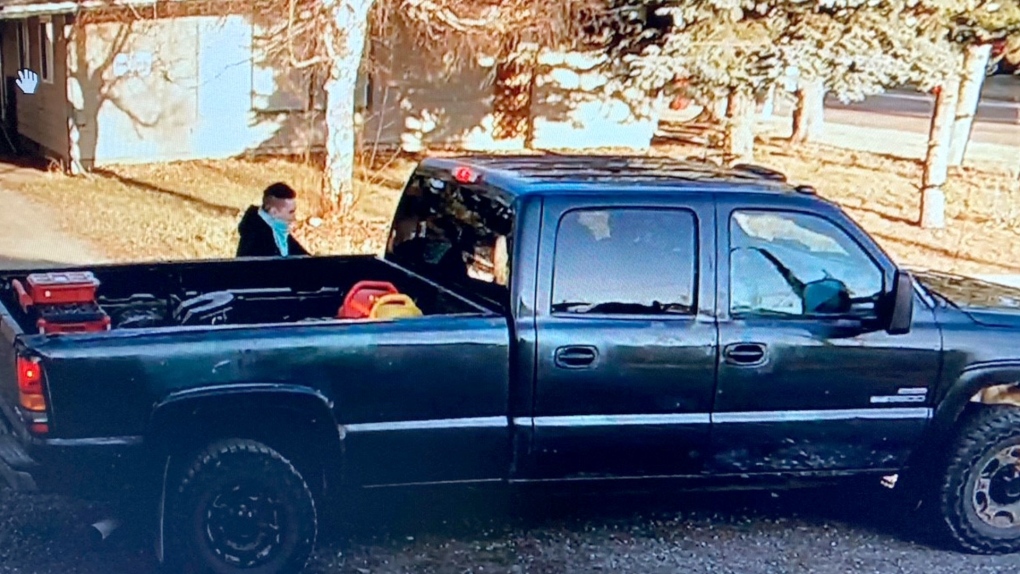 Image of a suspect in the theft of a catalytic converter from a motor home in Turner Valley, Alta. (RCMP handout)

RCMP in Turner Valley, Alta. has released images of two suspects linked to the recent theft of a catalytic converter from a motor home.

Police say three people were caught on surveillance video during the theft – which happened between April 25 and 27 -- however officers were only able to get descriptions of two.

The first suspect is described as having dark hair with a buzz cut, standing about 170 centimetres (5'7") and being about 30 years old. He was wearing a black hoodie with white symbols on the front and a light blue bandana.

The second suspect is described as being about 177 centimetres (5'10") and wearing a black hoodie, black jeans and black shoes with a white contour line. He appeared to be carrying a Dewalt sawzall tool and the stolen catalylitic converter.

The suspects fled the area in a black Chevrolet Silverado 2500 crew cab.

"A Milwaukee packout tool box and two jerry cans (red and yellow) were observed in the box," police said .

The truck is also equipped with a black, fifth-wheel hitch mounted in the box.

Turner Valley is about 60 kilometres south of Calgary.

Have you been affected by airport delays or cancelled flights? We want to hear from you

Have you been affected by airport delays or flight cancellations? Have you arrived at your destination without your luggage? Did you have to cancel a trip because your passport didn’t arrive in time? We want to hear from you. Email CTVNews.ca at dotcom@bellmedia.ca.

NATO faced rebukes from Moscow and Beijing on Thursday after it declared Russia a 'direct threat' and said China posed 'serious challenges' to global stability.