Premier Danielle Smith says she is glad to see many employers and businesses changing their protocols on vaccination, but critics suggest these changes are being made because of "harassment and threats."

Following her speech ahead of the resumption of the Alberta legislature, Smith said she's seen a lot of businesses rescind their vaccine mandates as the situation involving COVID-19 has changed.

She called those individuals and organizations "who are not discriminating" against Albertans "responsible."

"My sense of where we're at right now in Alberta is that most employers have made the responsible decision to not discriminate against their workers," she said Monday.

Smith added that if any business is still maintaining a strict vaccination policy, she wants to know.

One such organization Smith mentioned was the Arctic Winter Games, an athletic competition that's scheduled in Fort McMurray next year.

She says representatives came to the government, hat in hand, but were still "discriminating against the athletes."

"(They were) telling them they had to be vaccinated. So we asked them if they would reconsider their vaccination policy in light of new evidence and they did.

"And I was pleased to see that."

Officials with The Arctic Winter Games International Committee (AWGIC) amended their vaccination policy on Nov. 18, allowing all participating athletes, coaches, managers, mission staff and others to attend without being vaccinated.

"The AWGIC recognizes that public health circumstances have evolved and that COVID-19 and other respiratory illnesses are still impacting the public and that all persons need to remain vigilant to limit possible spread," the organization wrote in a statement.

"The AWGIC is working closely with the Wood Buffalo 2023 Arctic Winter Games Host Society to encourage the adoption of the recommended health measures at the time of these Games including masking, hand sanitization and other actions." 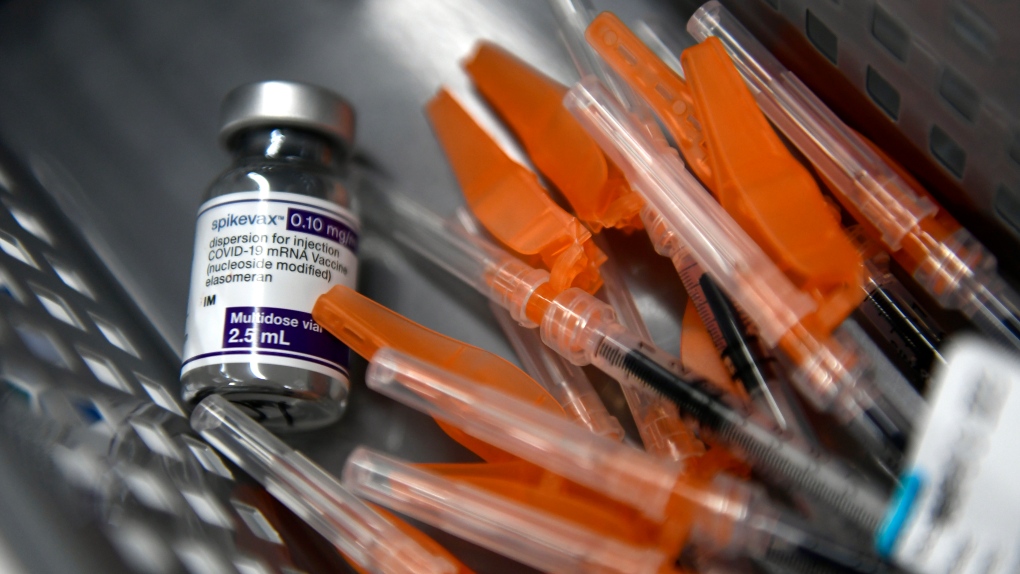 Pediatric doses of Moderna's Spikevax COVID-19 vaccine are seen a clinic in Ottawa, on Wednesday, Nov. 23, 2022. THE CANADIAN PRESS/Justin Tang

News of Smith taking steps against Alberta businesses who maintain vaccination policies came as a shock to Alberta's Official Opposition.

"In other words, Alberta is calling – to intimidate you," he said in a statement.

"Smith's behaviour will do serious damage to our reputation. It will drive away investment, destroy jobs and stifle opportunities for Albertans."

Sabir said the premier should instead do more to encourage businesses to choose Alberta instead of bullying them.

SMITH WILL DIRECT MINISTERS TO GET INVOLVED

On top of the example of the Arctic Winter Games, Smith said she'd "heard" of discrimination against hairdressers employed at an Alberta film set.

"I've asked my minister to give them a phone call," she said. "Those are the kinds of things that we'll do to remind people in this province that we do not discriminate against people, for any reason, and that now that we know a lot more about this virus that we would like them to address their policies and bring them us to speed."

When CTV News reached out to the International Alliance of Theatrical Stage Employees (IATSE), a representative said they had no comment on Smith's statements at this time.

However, IATSE did say a delegation will be in Edmonton for the throne speech on Tuesday. It hopes to speak with Smith and Labour Minister Brian Jean about the issue at their earliest convenience.