Stephanie MacDonald’s nine-year-old daughter Eva has experienced school bus cancellations or lengthy delays in the morning and after school for weeks.

On Monday, parents at Mayland Heights School were given a thirty minute warning by Calgary Board of Education (CBE) before school ended that no bus driver from Southland Transportation was available to pick-up their kids.

The CBE says there is no designated driver for this route.

MacDonald says it is frustrating for parents like her not knowing if Eva will be stuck at school while she and her husband work.

“There is definitely a lack of notice in terms of timing, because it does take a while to be flexible and pivot and call in your community to assist where they're not able to,” said MacDonald.

MacDonald drops Eva off every morning at daycare with Play N Learn daycare located off of Memorial Drive.

She has taken it upon herself to drive the children to school when there are delays or cancellations, a service she offers to four other schools.

However, Mayland Heights is not in her district, creating complications and an extra burden on staff when dozens of kids are coming through the door at the end of the day.

She says on Tuesday morning she dropped the students off, following an hour delay before the bus would arrive, in turn making kids late for class.

“It's just becoming, a strain on parents,” said Evans.

“First of all, it was 30 minutes late, then it was 60 minutes. There's no way I can let these children just sit around for an extra 60 minutes. When you look at it, 60 minutes the bus is going to come here, it's still got to take them to school. So those children are losing an hour and a half of school.”

MacDonald says she receives regular communication from the school board about delayed or cancelled buses.

CBE says there is a national school bus driver shortage, causing all kinds of inconveniences for families.

“This increases the possibility that drivers are asked to complete routes they are unfamiliar with and means buses could be delayed or canceled due to driver absences, mechanical issues or delays from the previous school on the route,” read a statement from spokesperson Joanne Anderson.

“At this time, we have approximately 35 out of 603 routes without a regularly assigned driver,” she said.

“This means the route is covered by spare drivers, floaters, and other drivers with an assigned route. As a result, there is an increased chance of delays. It is anticipated that the bus shortage will continue throughout the school year.”

CBE says it has discounted school bus fees for families by 20 percent this year.

“We urge families to have a back-up plan for late or cancelled buses,” the statement read.

“Families may also choose to make other transportation decisions for their child.”

For MacDonald, she says school bus transportation fees cost hundreds of dollars for families every year.

“We need solutions as to how this is going to play out, and what they're doing to recruit drivers, if anything,” she said.

“(Are they) combining routes or what is it that they're trying to ease. This is a service that we pay for and they're not providing a service at all anymore.”

In a statement to CTV News on Tuesday, the CCSD said some routes may not possess a stable driver and “others may have sporadic outages day-to-day.”

“These issues continue to exist for all Calgary and area school districts,” it said.

“Currently, the CCSD has (between) 10 to 12 out of 235 routes without a bus driver. Our carriers are continually hiring and training new drivers to try and fill these positions.”

The CCSD says parents should consider putting together a back-up plan – such as carpooling, parent pick-up and “other solutions.”

“We will try to provide as much notice as possible. We thank everyone for working through this challenging time with us.” 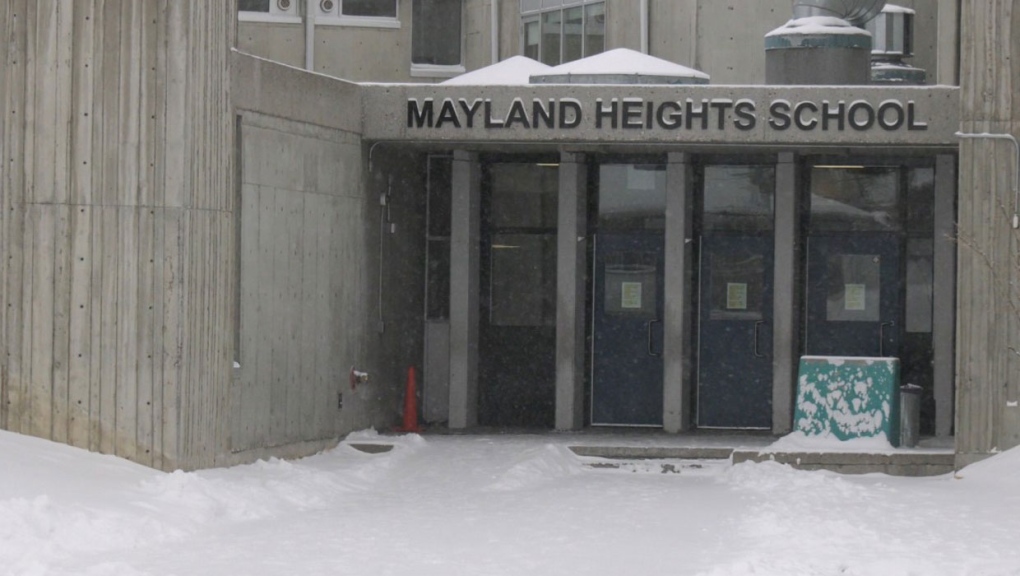 On Nov. 21, CBE says the bus did not arrive at Mayland Heights School until 4:45p.m., 75 minutes after the bell rang for end of day.

That bus did not drop of its last student until after 8 p.m.

CBE says it is “very concerned” by this incident.

“It is not what we expect from our service providers,” read a statement.

“We have conducted an investigation into what look place and have taken steps with the service provider to reduce the risk so this type of incident (never) happens again.“

In a letter to parents four days later, Southland Transportation offered up an explanation after apologizing for the lengthy delays.

In the letter, obtained by CTV News the company wrote that a high number of students were on the bus, with multiple routes being combined, due to previous delays on other routes.

“We also found that the available driver was not familiar with the route,” said Arjan Slagmolen, regional director for Southern Alberta at Southland Transportation.

The company also blamed heavy traffic congestion, due to the time of day. 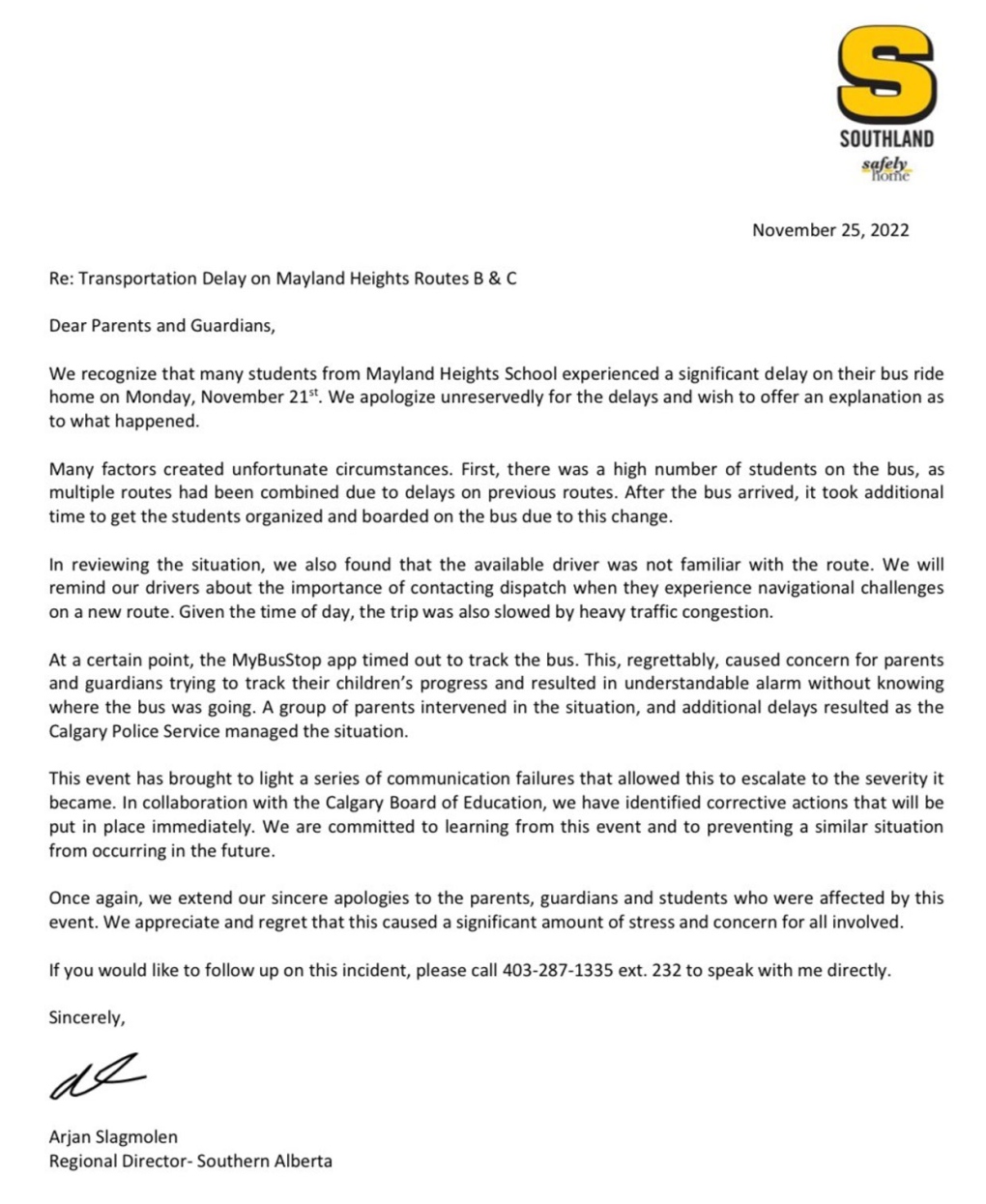 Calgary police were also called at 6:06 p.m. by concerned parents wondering where their kids were.

The company wrote in the letter that the MyBusStop app had timed out for parents to track the bus.

Slagmolen says the event “has brought to light a series of communication failures, that allowed this to escalate to the severity it became.”

CTV News reached out to Southland Transportation for an interview on Tuesday.

It had received our request, but we did not hear back.