LETHBRIDGE, ALTA. -- The Alberta Birds of Prey Centre is home to the region's first 'Mosquito Terminator' concept, which is simply a nesting platform for species that feed on the world's most hated insects.

The concept is simple; the more barn swallows and bats that can find safe and peaceful shelter, the more mosquitoes they will eat, effectively decreasing the blood sucking bug's population in the area.

"Nobody loves mosquitoes other than those that eat them," said Kelly Weatherall, Fortis Alberta senior planner and the mastermind behind the nesting platform.

"Barn swallows tend to nest under people's houses and they tend to be over doors or windows," said Weathereall. "They make a mess, and people try to get rid of them so I'm thinking well, here we want them, so let's make a spot for them."

The nesting platforms are designed to withstand southern Alberta's fierce wind while effectively simulating the roof of a barn.

With the birds hunting during the day and bats going out to eat at night, the concept is essentially a 24/7 mosquito killing operation.

"Barn swallows and especially bats are just voracious consumers of mosquitoes and so we all know how bugs like that really irritate us and it's good to use a real natural control," said Colin Weir, the executive director for the Alberta Birds of Prey Centre.

"One of the things that we want to do at the centre is, we want this to be a place where there are different ideas that people can actually take and use them in their own farms, acreages, and even urban backyards," Weir said. 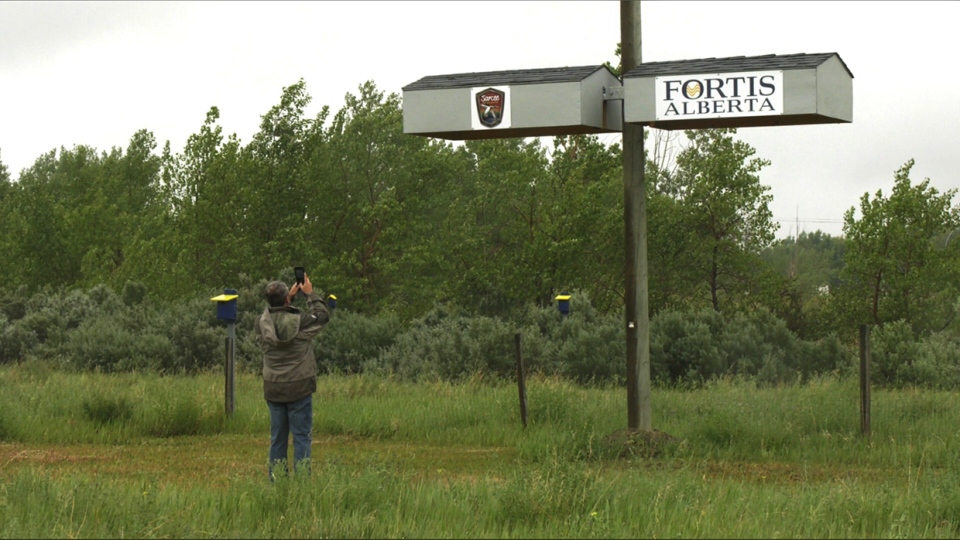 The project was unveiled on Thursday, and no birds or bats have moved in just yet.

But the goal is for the project to take flight by making this a more mainstream approach to mosquito control while offering a safe space for barn swallows and bats.

"It is a pretty neat looking structure and it is a unique design so there's a lot to be learned," said Fortis Alberta president and CEO Janine Sullivan.

"That's the whole idea these days is to understand how projects like this can help us really sustain the environment and support wildlife."

An individual swallow or bat can eat up to a thousand mosquitoes per day, which is a promising statistic for the project.

Fortis Alberta is the Alberta Birds of Prey Centre's biggest supporter having donated $720,000 since 2006.

During Thursday's unveiling of the nesting platform, the company presented the centre with another $50,000 cheque to cover operating costs during the centres' most challenging year ever.

"They've just been such a wonderful, supportive corporate sponsor over the years. They're making a meaningful difference to the environment here in southern Alberta," said Weir.