Alberta continues to hold out against introducing further public health measures despite pressure from within the medical community, and a new poll suggests most Albertans agree with the province.

According to a poll conducted by Angus Reid, 57 per cent of Albertans surveyed expect to contract Omicron regardless of the precautions they take.

The response across Canada was 55 per cent.

When asked if it was time to end restrictions and let people self-isolate if they're at risk, 50 per cent of Albertans agreed, more than other Canadian provinces.

The Omicron variant of COVID-19 is raging across the province and with drastically reduced testing, the province estimates it's only detecting one-tenth of all cases.

"I think everybody is going to be exposed to this virus eventually. I think it is inevitable," said Krystal Tait, a Calgarian who agrees with the majority of respondents in the survey.

She adds she is not in favour of any further restrictions because of the availability of protective measures like vaccines and the passport program.

"It's very different now than it was a year ago, at the start of the pandemic. We now have widely available vaccines."

Tait says public measures should be targeted to protect those who are at risk of severe outcomes as opposed to sweeping measures imposed across society. 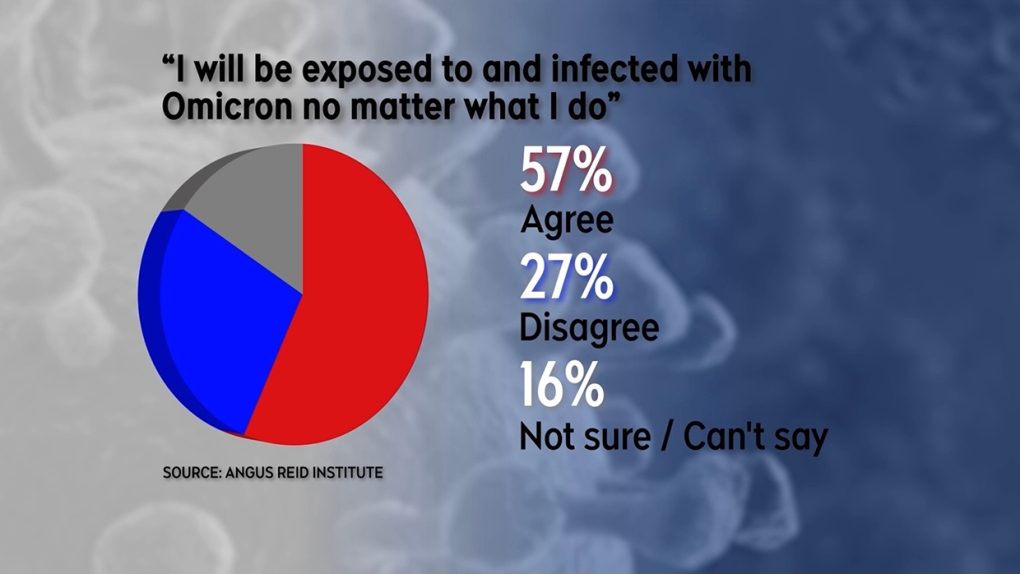 According to a poll conducted by Angus Reid, 57 per cent of Albertan surveyed expect to contract Omicron regardless of the precautions they take.

"It's not like a hurricane. You can't just hide in a bunker and come out when the storm has passed because when you come out COVID is still going to be there."

Premier Jason Kenney did not announce any further measures Thursday and urged Albertans to follow the current guidelines and choose a booster vaccine.

"(Alberta's situation) has the potential to get more serious and that's why we need the help of all Albertans. Each of us has a part to play in our response to Omicron," Kenney said. "Just like in previous waves, our individual actions combined to determine how the virus spreads and how many people will get sick."

One infectious disease physician said that while spread and exposure is higher now than it has ever been, protective steps are key to protect individual health and the healthcare system.

"Some people are very scared of getting COVID and, I think it's sort of level-setting people's expectations around it. A lot of people will get this and it's a hell of a lot better if you get vaccinated and get the booster and then you get it right, because that really does mitigate against severe outcomes," said Dr. Jia Hu.

He said policymakers are challenged with imposing measures that range from strict lockdowns, to fully opening up.

Dr. Hu added that Alberta's current restrictions are likely designed to prevent too many people from becoming hospitalized all at once, and to allow time for people to get boosted, spreading out the wave.

"Getting infected might not impact (a person) the first time, but the second time (they) could develop long COVID," said Dr. Gosia Gasperowicz, developmental biologist with the University of Calgary.

She says catching the virus is not inevitable.

CRA says it has $1.4 billion in uncashed cheques sitting in its coffers

What is a 'zombie fire?' Experts explain the cause and concerns

The white father and son convicted of murder in Ahmaud Arbery's fatal shooting after they chased him through a Georgia neighbourhood were sentenced Monday to life in prison for committing a federal hate crime.