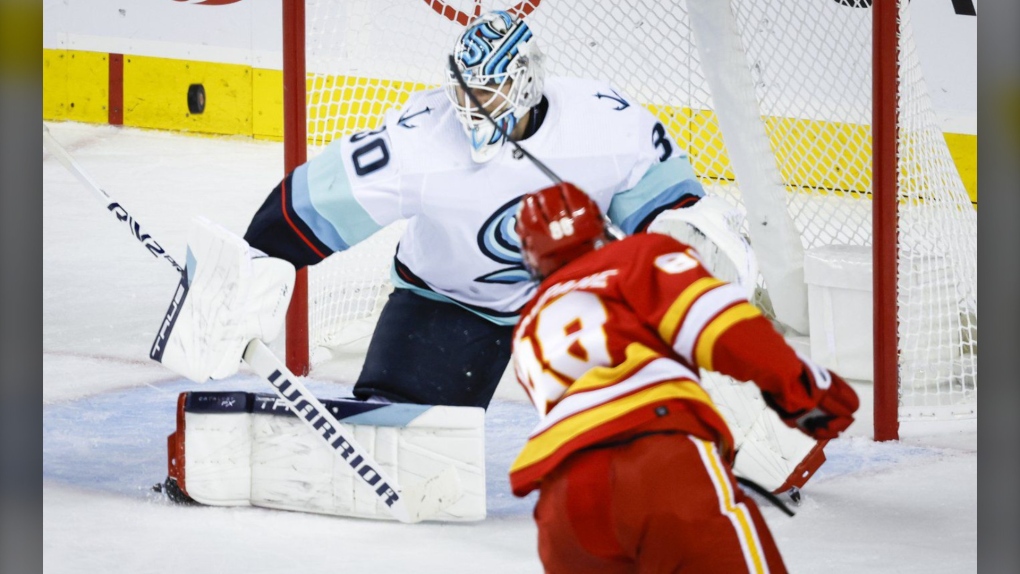 When Chris Tanev last played in an NHL game in the spring, he was playing through a dislocated shoulder. He's healthy again and it showed on Monday night.

Tanev scored in his pre-season debut and his longtime teammate Jacob Markstrom made 21 stops as Calgary defeated the Seattle Kraken 4-1 in NHL exhibition action.

"It's good to get back and get into a game and get up and down the ice and compete." said Tanev, a key member of the Flames top-four on defence. “You can mimic it in practice as much as you want, but it's never going to be the same. It's always half a step quicker out there in a game. So it's good to get out there and play a full 60."

Tanev suffered a dislocated shoulder against Dallas in the opening round of the Stanley Cup playoffs that led to surgery in May. He's been a full participant since the start of training camp, but had been held out of pre-season action until Monday.

It didn't take long for Tanev to be noticed. On his second shift, he had a great scoring chance on a slick curl-and-shoot move. Later that same shift, he threaded a cross-ice pass to Milan Lucic for another dangerous opportunity.

"Moses parted the seas a couple of times and I had quite some time, but it was good players making good plays," said Tanev, who had a game-high six shot attempts. "With Darryl (Sutter), that's the mentality, right? Shot volume and getting as many pucks to the net as you can so that's something that I need to improve on from last year."

Entering their 10th season together in the same organization, Markstrom knows what Tanev is all about and he's happy to have him back.

"It's everything he does, and especially coming back after a long summer," said Markstrom. "Since camp, and a few weeks before camp started, you'd see him, the first guy here and the last guy to leave and he sets a great example for everyone in this organization."

Tanev's goal came at 7:44 of the first on a shot just inside the post on Martin Jones after his initial shot was blocked by Matty Beniers.

Michael Stone continues his bid to turn his professional tryout into another contract by connecting on the power play to make it 2-0 in the second. It's the team-leading third goal of the pre-season for the 32-year-old Stone, who has signed one-year contracts with the Flames each of the past three seasons.

Nineteen-year-old rookie Beniers, with his third goal in as many games, scored the lone goal for Seattle (4-1-0), breaking Markstrom's shutout bid at 2:22 of the third on a one-timer on the power play.

"Matty's competitive level and pace, he's a driver, right? He can drive play, he can transport the puck, and in tight spaces, he's able to find space," said Seattle coach Dave Hakstol. "He works at it every single day. He's gonna be a guy that we see add to his game week in and week out and just keep working at it because at the end of the day, he's a guy that loves the game."

Beniers was the Kraken's first-ever draft pick, selected second overall in the 2021 NHL Entry Draft. He made his NHL debut late last season after the conclusion of his college season with the University of Michigan. In 10 games with Seattle, he had three goals and nine points.

"It's been huge, just getting a comfort level of what an NHL game is like and getting those 10 games and then being able to translate that into these games now," said Beniers.

Also making his pre-season debut for Calgary and chipping in an assist was Andrew Mangiapane, who joined camp late due to a minor lower body injury sustained during the off-season.

Coming off a career-best 35-goal season that earned him a three-year, $17.4-million contract extension, Mangiapane played on a line with newcomer Nazem Kadri and Dillon Dube on what could be the Flames second line come opening night.

There were signs of chemistry throughout the evening as the trio created scoring chances. On one sequence in the second period, Kadri got the puck in his own net and sent a slick 120-foot pass onto the tape of Mangiapane that set him free off the wing.

Martin Jones had 21 stops in going the distance in net for Seattle.

NOTES: Calgary's new-look No. 1 line of Jonathan Huberdeau, Elias Lindholm and Tyler Toffoli had the night off. … The Flames will conclude their pre-season with a home and home against the Jets that goes Wednesday in Winnipeg and Friday back at the Saddledome.

NEW | 'Not looking for a fight' but nothing off the table when it comes to Alberta sovereignty act: PM Trudeau

A massive Ontario-wide investigation into child exploitation has led to more than 100 people being charged, police announced on Wednesday.