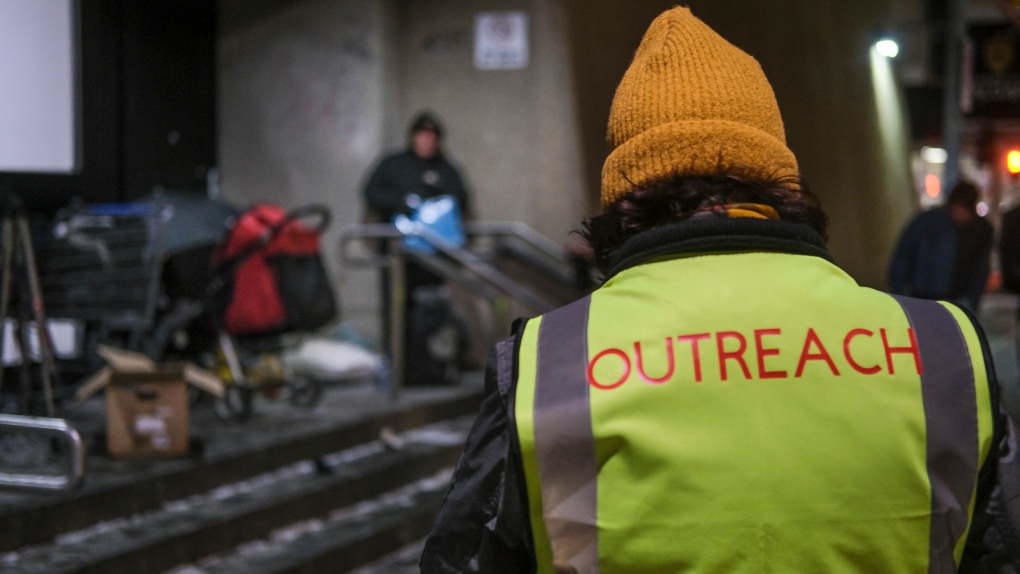 Outreach volunteers offer help to the homeless on a -20C night in Calgary, Alta., Tuesday, Dec. 14, 2021. THE CANADIAN PRESS/Jeff McIntosh

Organizations that assist the city's homeless population will be able to benefit from millions in funding to help protect Calgary's vulnerable populations from extreme weather events.

The Calgary Homeless Foundation (CHF) says the commitment from the City of Calgary will see $2.3 million over the next four years.

Officials say the money will be used to coordinate efforts with shelters, social agencies and outreach programs to help the homeless during severe weather.

"We are pleased that the city of Calgary has decided to continue supporting this critical initiative," said Patricia Jones, CHF CEO in a release.

"This new funding clearly indicates the city's commitment to work with community organizations like us to tackle the complex nature of homelessness."

Last year, the CHF was assisted by the city and the United Way to create warm spaces, provide winter essentials and support other efforts during extreme cold events.

That work continued as a need arose during the summer in Calgary.

The CHF's goal is to create "a year-round" plan to support Calgary's homeless during extreme weather conditions.

Grant Wahl, one of the most well-known soccer writers in the United States, died early Saturday while covering the World Cup match between Argentina and the Netherlands.

The search for a Washington state woman whose husband couldn't find her after spotting a shark while they were snorkeling in Hawaii was called off Friday.

Google's top trends: What did Canadians search for in 2022?

As we approach the new year, Google is providing a glimpse at what 2022 looked like for Canadians, based on the most popular search terms entered on the site.