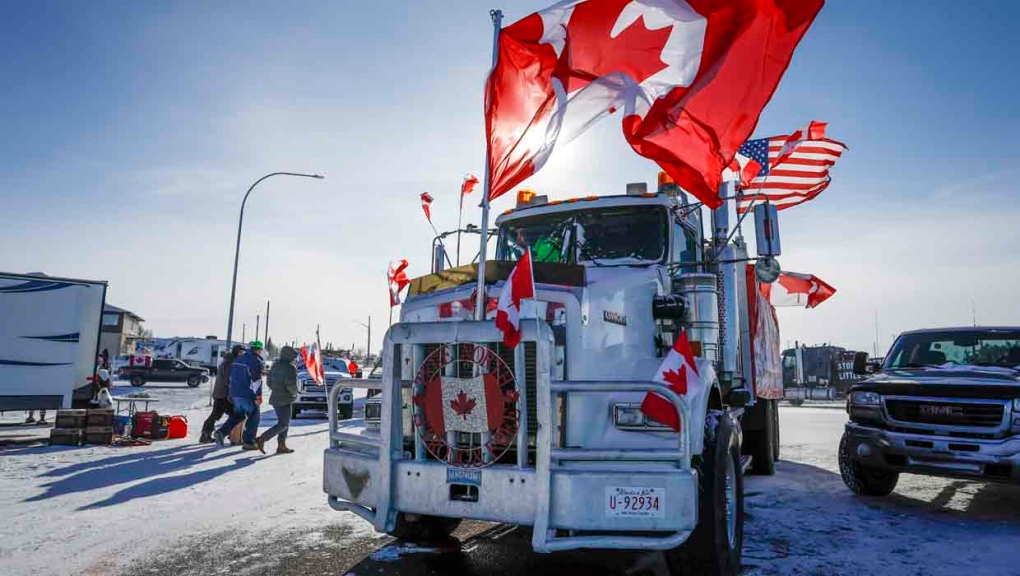 A truck protest remains in place at the Coutts border crossing between Alberta and Montana as arrests are being made at similar protests in other provinces. THE CANADIAN PRESS/Jeff McIntosh

Police officers have cleared a protest in Ontario and a handful of protesters are facing criminal charges in connection with a B.C. rally, but the RCMP have not taken similar action in Alberta.

The latest news from the Canada-U.S. border crossing states that commercial trucks are still unable to get through.

They're instead being told to drive hundreds of kilometres into either Saskatchewan or B.C. to continue their trip.

Earlier on Sunday, police officers cracked down on a protest blocking the Ambassador Bridge, a major route connecting Ontario and Michigan.

Authorities said several vehicles needed to be towed from the road and at least 12 people were arrested on charges of mischief.

They too face charges of mischief.

However, there is no such news coming from the Coutts border crossing, where protesters have been encamped for weeks.

Premier Jason Kenney, speaking to CTV's Question Period on Friday, says the protest is "intolerable" but the ability to enforce the rules remains with the RCMP.

"We have 60,000 licenced truckers in Alberta, 300,000 licenced commercial vehicles and there's 40 involved in that situation at the border crossing. I don't think they're professional, year-round, long-haul truckers and all they're doing is massively inconveniencing thousands of truckers who are just trying to make a living."

He says his government will not tell police how to do their job.

RCMP have issued 53 tickets to the Coutts demonstrators so far and plans to hand out more on Sunday.

Three large excavators, which police say were on their way to join the protest, were also disabled.

Alberta's Official Opposition has asked the Kenney government to seek a court injunction to end the protest.