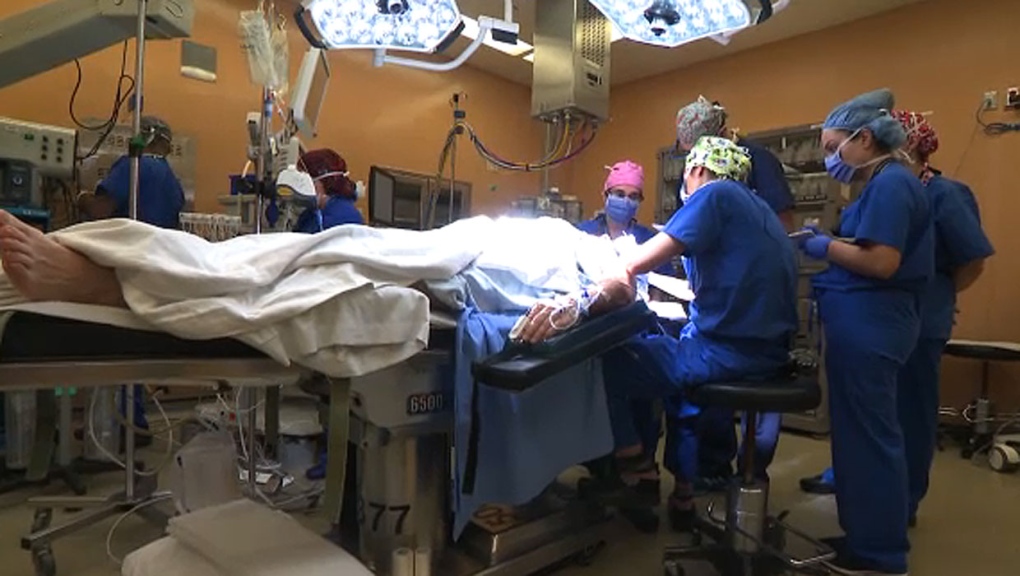 A stock photo showing a survery under way.

The Alberta NDP is calling on the provincial government to stop what it says are "plans to Americanize public health care in Alberta."

Opposition party leader Rachel Notley made the plea during an appearance at Calgary's Foothills Medical Centre on Wednesday.

During her speech, Notley said Albertans deserve a public health-care system that is strong and that they can rely on.

"Albertans deserve to know there is an ambulance on the way when they're in distress and a bed available at the nearest hospital," she said.

"Over and over again, the UCP has led our province down a path of health-care disruption, chaos and privatization. The UCP is driven to bring more American-style for-profit health care into our public Alberta system, and that's wrong."

The rallies are planned by Protect Our Province Alberta, a group made up of health-care professionals that was formed during the COVID-19 pandemic, and come two days after it was announced that Alberta Health Services (AHS) president and CEO Dr. Verna Yiu, had been fired.

When it was announced, Health Minister Jason Copping said in a statement the change had been in the works for some time, and the recruitment process for Dr. Yiu's replacement is under way.

"It's time to move forward with an ambitious agenda to improve and modernize the health system, and renewed leadership in Alberta Health Services will support delivering those changes," Copping said Monday.

Notley said the "unceremonious" firing of Yiu is the UCP's way of "clearing the desk for even more chaos and upheaval in our health-care system."

"The fact that they had to fire her to make way for their changes should raise the alarm for every Albertan," she said. "The UCP is coming for health care and they are coming fast."

"Recently, (Alberta) Budget 2022 doubled the proportion of surgeries Alberta contracted out to private facilities, taking important resources out of the public system.

"What we've seen in this last budget is this government's decision to take $100 million out of the health budget compared to what was spent last year."

Notley is calling on Premier Jason Kenney and Health Minister Jason Copping to "stand down."

"I am calling on them to take their plan for cuts, chaos and American-style health care off the table and put it on the ballot, with honesty, so that Albertans can make the choice.

"Put our plan against their plan in the next election and let Albertans decide."

September jobless rate falls to 5.2 per cent as fewer Canadians look for work

'There'll be no turkey': Sombre Thanksgiving for Atlantic Canadians hit hard by Fiona

The Thanksgiving holiday weekend has been dampened for thousands in Prince Edward Island and Nova Scotia who are still without power -- almost two weeks since Fiona hit on Sept. 24.